In a Managed Service Provider (MSP) model a strategic partner takes on, transforms, and runs business digital operations and processes to improve business outcomes on a long-term basis.

Agile and flexible service models – makes it easier to respond to change and benefit from continuous improvement.

Goals of MSP and customer not always aligned or understood

May still be liable for risk outsourced to Managed Services Provider

Commoditization of the sector

When it works well

A Managed service provider (MSP) business works best when customers see the process being outsourced as having high enterprise risk, with urgent need for expertise.

For example, the rise of ransomware and security breaches have had a dramatic impact on adoption of companies hiring MSPs. The real costs to the customer, and their reputations, put them at risk. Those MSPs who invested in well-planned, multi-layered cybersecurity offerings, therefore, saw their businesses grow.

MSPs that specialize in specific industries or aspects of technology tend to perform better than generalized outsourced IT. Because MSPs tend to price based on business value, those that deeply understand industry or customer economics are able to translate technical capabilities into business value add.

Related to the above, that are able to price their services to the value that they provide outperform those that sell based on general service levels or guarantees. However value selling does require stronger relationships with top decision makers, the ability to  deeply understanding the pain points, and the financial logic to sell on an ROI basis.

Not all MSPs sell their services as a subscription model, though pricing on an all-you-can eat or tiered basis has become more of the norm for all sizes of MSP. When MSPs make the transition to subscription they tend to see higher retention rates, growth, and margins.

Challenges to the MSP model

The biggest challenge to the MSP model is to define a competitive differentation. Because MSPs are typically services wrapped around third party technology, there is no strong competitive moat. MSPs can increase differentiation through specialization or investment in software or hardware to enable core workflows valued by the customer.

MSPs need to invest in understanding and adopting new technology to keep pace with advancements. If pricing is commoditized and margins are low, MSPs can be caught unable to invest in continuous learning and adoption of new technology, and can become outdated and quickly replaced by a new MSP who been able to deliver new capabilities.

Choosing Which Technology to Support

MSPs can be dragged into the wrong end or wrong timing of the technology hype cycle, for example investing heavily in blockchain capabilities before a target industry was ready to adopt. On there other hand, a number of MSPs were caught off guard during COVID19 response by not investing in remote, automation, and IoT or Internet-of-Things offerings.

Even before the demands of COVID19, automation has been a key driver of scale for MSPs and their customers. Automation does not replace employees but rather moves them to higher value task so that MSP providers can spent more time on strategy and operational improvement.

MSPs have ridden the wave of adoption in the shift from on-premises servers to cloud-based systems, and the growing use of connected sensors and hardware, and the consumerization of IT – end-users chasing their own technology solutions. All of these trends in addition to COVID19 have accelerated the shift to the cloud, enabled by MSPs.

Telecom Service Providers are now keen to the idea of MSPs in order to branch out beyond data services and make use of their scale. Telco’s dominant logic is the subscription model, so their entire

They already work on the subscription model so there is no need to migrate customers to a new world order. ,As telcos enter the managed services space, the existing MSPs will feel the pressure to try new things to increase revenue the year ahead and beyond.

Telecom Service Providers or better known as telcos, are making use of their existing scale and IT savviness to shift beyond data services and voice to selling managed offerings

Managed Service Providers have not followed the hype cycle to promote adoption of internet-of-things or blockchain, but instead have adopted practical models like hardware-as-a-service or device-as-a-service. As connected sensors and devices combine with 5G networks to manifest more use cases and interactions, MSPs are potentially positioned to benefit.

However, they will need to not just implement technology solutions but search and validate new business models made recently possible by these technologies.

Business customers seek out more result-based outcomes with pre-defined ROI and standards based on benchmarks. Those that are able to sell on an outcomes basis are more likely to maintain C-suite relationships and higher retention.

Not all customers want to purchase recurring revenue MSP services, so test your value proposition first and determine the ideal segments. 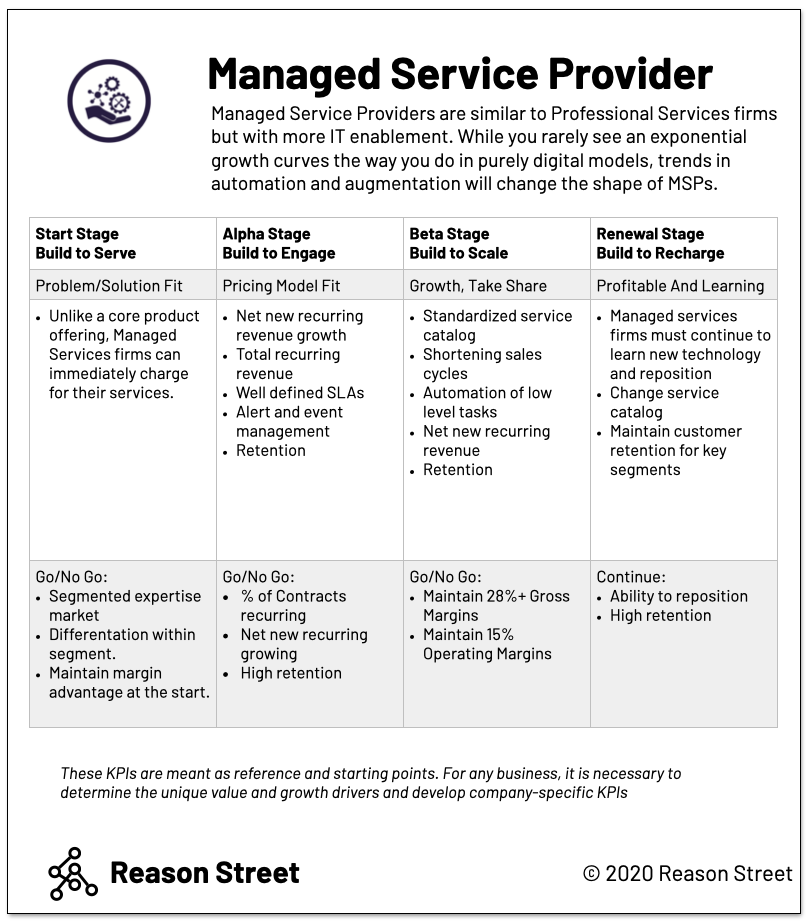 Before you consider MSP

There’s no coasting in MSP models, expect to continuously innovate. Meanwhile your role is to adopt the most practical technology that drives business outcomes, so less bleeding edge and more early majority.

Not all customers want to buy their solutions as a MSP; they may prefer to buy devices and hardware, capitalize the cost on their balance sheet, and buy a software and service agreement separately.

If you are starting a brand new MSP, develop a uniquely differentiated value proposition that lasts beyond your initial set of contacts. Run a sales or marketing test to ensure that you could develop leads based on that value proposition.

If you are transitioning a traditional device or services business to MSP, segment your customer base to determine which types of customers are more likely to migrate. Test before you migrate, and control the shift as there will be a hit to your revenue and cash flow as well.

You and I Were Meant to Fly the Rise of Managed Services, Deloitte, 2018.