Facebook seems more complicated than it is. Of all of the Tech Titans, Facebook has the simplest business model. Business model innovation can be understood as a factor of three physical forces: waves, flywheels, and business models themselves. 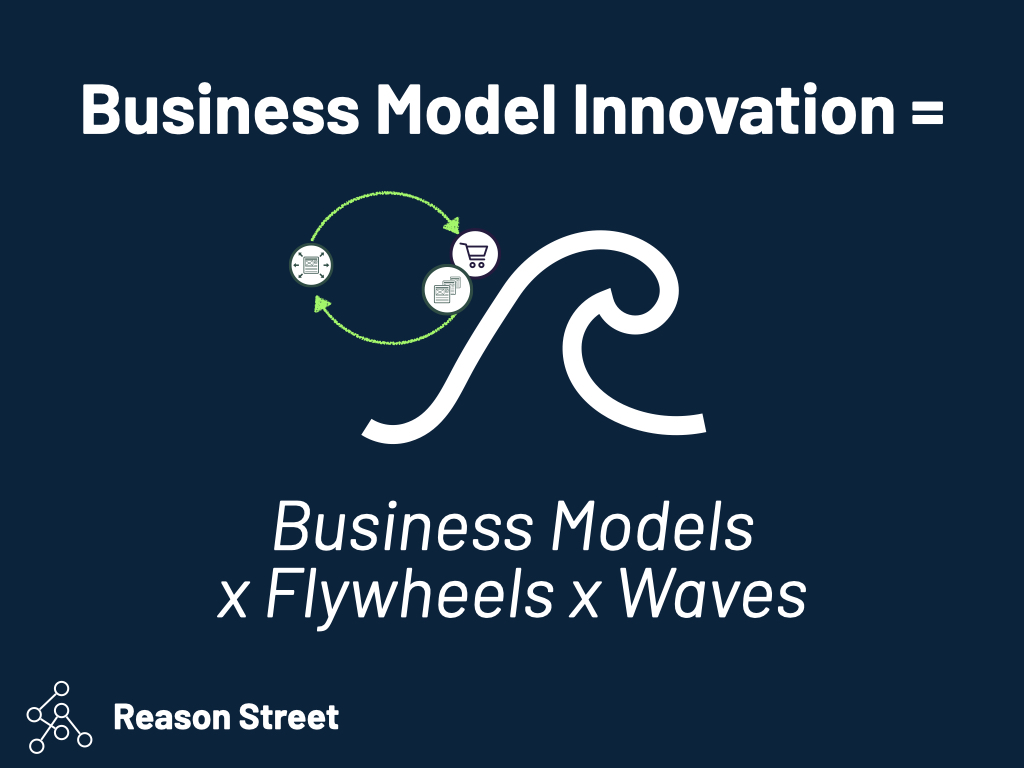 Facebook was famously founded in 2004 on the Harvard campus by Mark Zuckerberg and roommates Chris Hughs, Dustin Moskovitz, Eduardo Saverin, and Andrew McCollum.

If you know the story – they began with Harvard, then expanded to elite ivy league universities, then all colleges. In the olden times, students arriving on campus would be given a printed “facebook” filled with fellow Freshmen names, home towns, high school, and photos. Even before the company digitized the experience, the prior print versions were also used to voyeuristically check in on your fellow classmates and size each other up. Facebook’s experience was simply built on a prior offline social experience.

Early investors were impressed with the fast growth once Facebook launched on campus, and did not even foresee growth in the general population.

If you remember from Facebook, the movie, Eduardo Saverin’s fictionalized character fought with Mark Zuckerberg’s fictional character over the opportunity to sell ads early on the site. The company postponed developing an ad platform for three years until they had substantial growth on the site. Early ads were sold as “flyers” similar to the type of print flyers a brand might post to connect to college students on campus.

Free online app for the web

In the run-up to Facebook’s IPO, the company made a major acquisition of Instagram, paying $1 billion for a company with no revenue and 13 employees. At the time Mark Zuckerberg was criticized for overpaying. But in the end, Instagram ended up becoming one of the highest performing acquisitions of all time.

Instagram was acquired for the momentum in its user growth, and deep engagement with the app. At the time of the acquisition, Facebook’s mobile offering was weak and only just developing and the company did not have much to offer advertisers in this fast-growing medium. The Instagram acquisition shifted the center of gravity to the mobile handset, which now generates the majority of overall Facebook revenue.

Facebook’s WhatsApp acquisition did not follow the same path – the company had very little revenue at acquisition and was also purchased for a large sum. But look at the cost per user by acquisition price and you will see that Facebook made an affordable purchase compared to similar pre-social media era acquisitions.

For antitrust regulators who complain about Facebook’s power today, it was hard to see the future value of Instagram and WhatsApp at the time of acquisition because each company was focused on aggressive user growth and not yet monetizing. With only free services, the evaluation of market share power did not seem relevant at the time.

Instagram was acquired for its fast user growth on mobile 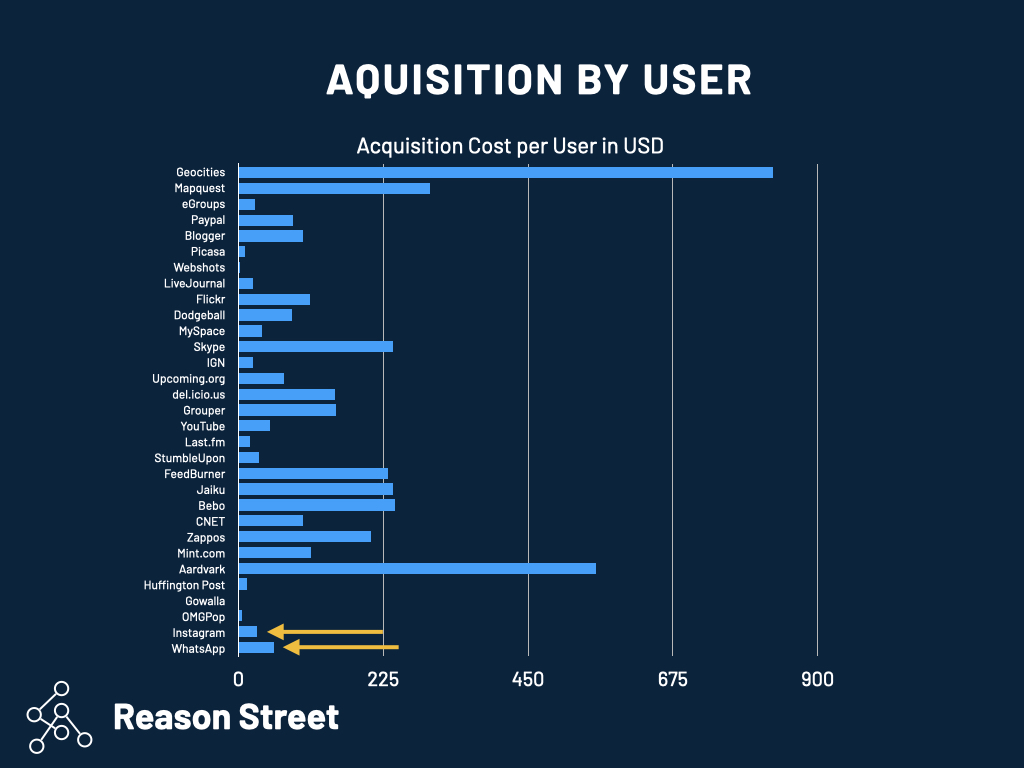 Facebook’s attempt to build a global cryptocurrency, called Libra, was in fact the company’s fourth attempt to generate a diverse revenue stream outside of advertising. Let’s take a look at all of the attempts:

Originally started with a Facebook credits system. If you remember back to the days of Zynga games like Farmville and Zynga poker, Facebook offered credits for purchase in-game apps, and even in gift card format. Based on Chinese game apps that generate the bulk of their revenue from in-game purchases, Facebook envisioned that game credits would become a major source of revenue.

Facebook retained 30% and developers got 70% of all revenue earned through these credits, which proved too costly for social game developers who then built their own destinations and sought partnerships where they wouldn’t have to pay 30% for payments processing in addition to the rising advertising/user acquisition costs on Facebook. Credits was discontinued in 2012.

Facebook attempted to launch a marketplace – essentially a Craigslist style or classified space for users to sell products and services. However, the offering never gained traction, and in 2009, control was transferred to Oodle, the platform powering the functionality, and eventually shut down in 2014.

The classifieds-style marketplaces were redesigned as a home-grown project and launched again in 2016, and continues today generating a sliver of Facebook’s overall revenues.

Facebook announced Libra back in June 2019, a “stablecoin,” Libra would be backed by reserves of currency including the dollar, euro, and Japanese yen, so its value wouldn’t fluctuate as wildly as that of bitcoin or other cryptocurrencies. A new Facebook subsidiary, Calibra, is developing a wallet that would let people send Libra through a stand-alone Calibra app or via WhatsApp.

Libra would move across a blockchain, unlike most international money transfers, which primarily go through a system called SWIFT. All of this would potentially make Libra transfers cheaper, faster, and more accessible, especially if people are able to transfer Libra on any kind of cellphone, as the Libra coalition anticipates will happen once other parties develop digital wallets.

Facebook claims it would not make a transactional fee off of this offering.

The challenge: Facebook received extensive criticism in the US and EU in response to the announcement, and original partners like PayPal, Stripe, Mastercard, Visa, and eBay started to pull out of the original partnership. While the US and EU markets are rightly skeptical of turning payments over to Facebook, other countries that do not have such stable banking infrastructures may permit more experimentation through Libra.

In sum, despite all of these attempts, revenue from payments is less than 3% of total revenues, the bulk of which continues to be generated through advertising.

betting on a new format

Facebook has been less successful in developing and acquiring products to extend the reach of its social network.

In one year Facebook partnered with HTC to bring forward a Facebook-centered phone with a promise to “put people first.” In reality, this meant that an Android skin Facebook Home dominated the phone experience and created an awkward interaction with other apps. Facebook and its retail and telco partners dropped the product soon after launch after terrible reviews and worse sales.

The company launched a homegrown consumer video calling device, Facebook Portal built on Facebook Messenger.  Portal struggled with privacy snags at the moment that the Cambridge Analytica scandal broke, and sales of the product have been underwhelming.

The original Building 8 team was disbanded and the remaining research projects were moved to Oculus Research, now known as Facebook Reality Labs.

Facebook Reality Labs is charged with a research effort to develop a brain-reading interface — a noninvasive wearable device that will allow people to type using their thoughts. Indeed. Which leads us to Facebook’s limit to growth: user trust, and the friction of advertising. 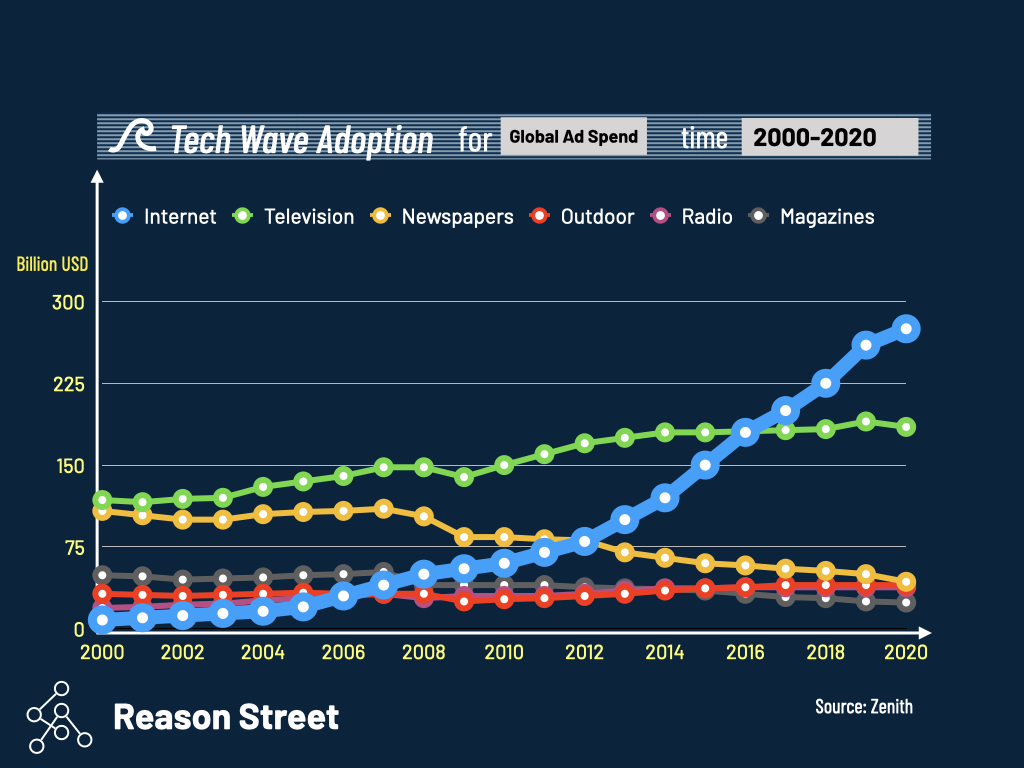 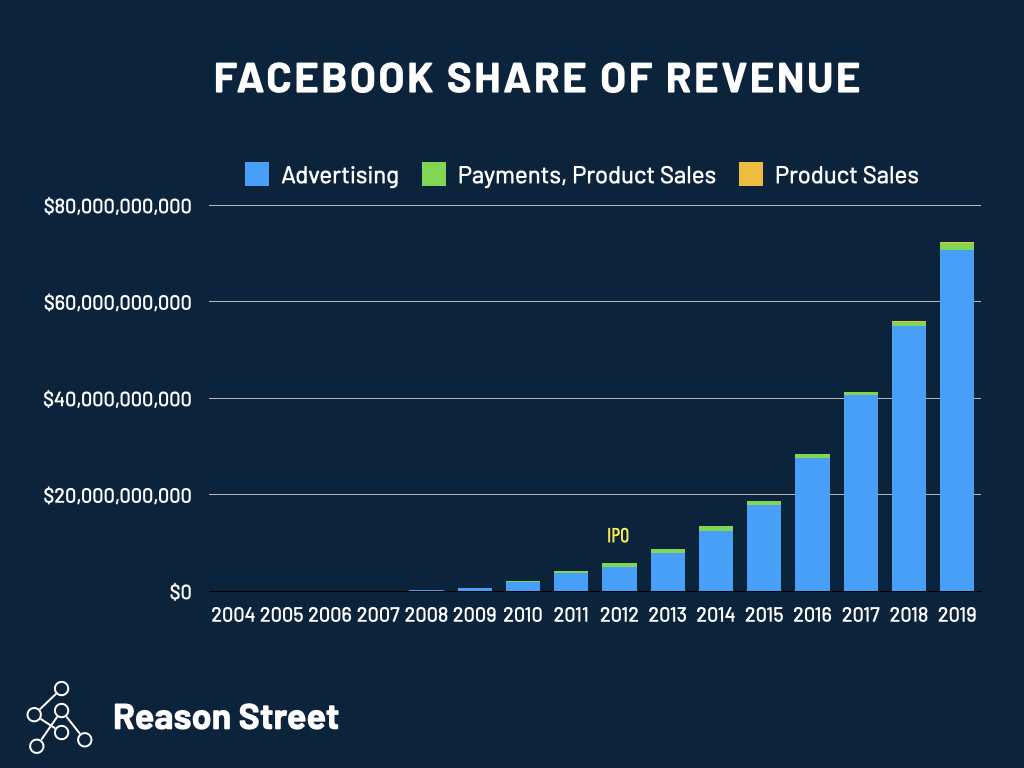 If you live in the US or the EU and read news sources on a regular basis, your sense of Facebook may be influenced by the tremendous amount of negative press that Facebook how the company conducts research, shares data with partners, modulates hate speech and problematic content, and behaves with governments and regulators.

These scandals have an effect on Facebook’s consideration in ESG funds that rank companies based on environmental, social, and governance performance.

Amid ongoing controversy over its use of its users’ private information, Facebook has been kicked out of an index tracking companies that abide behind socially responsible practices. S&P Dow Jones Indices announced that the social network no longer will be part of the S&P 500 ESG Index on Jun 13, 2019.

While the company does exemplary work moving its servers and energy base to renewable sources, they receive weak marks in governance and social impact. 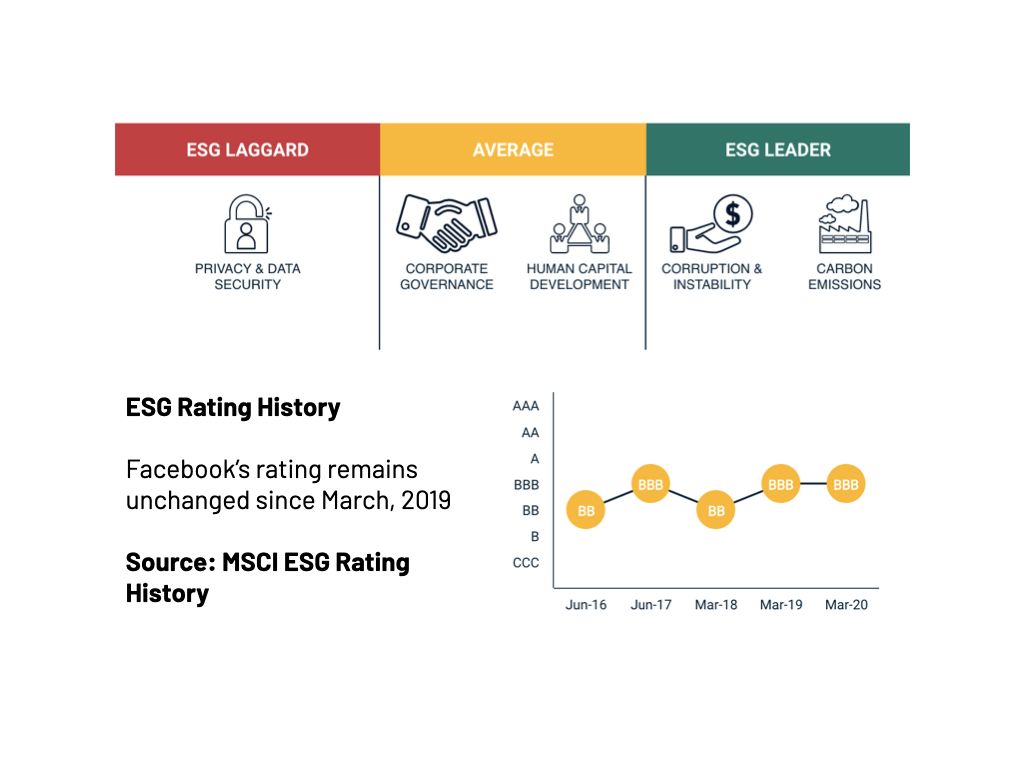 Facebook’s business model story can be understood as a singular focus on creating the most engaging family of apps in the history of time, and growing that user base until it reaches its massive scale.

While the company has attempted to diversify revenue to products and payments, the bulk of revenues continue to be driven by advertising. From the start, Facebook’s business model, therefore, created friction as the company pivoted between serving the needs first of users, then advertisers.

The company has only recently started to address concerns of major data and security breaches, and also refuses to address the consequences of fake news in ads and other formats. While Facebook’s stock price has become more volatile, user growth and brand advertising growth have continued to rise consistently, and exponentially, so it’s worth looking at the company through the numbers, not just the news. 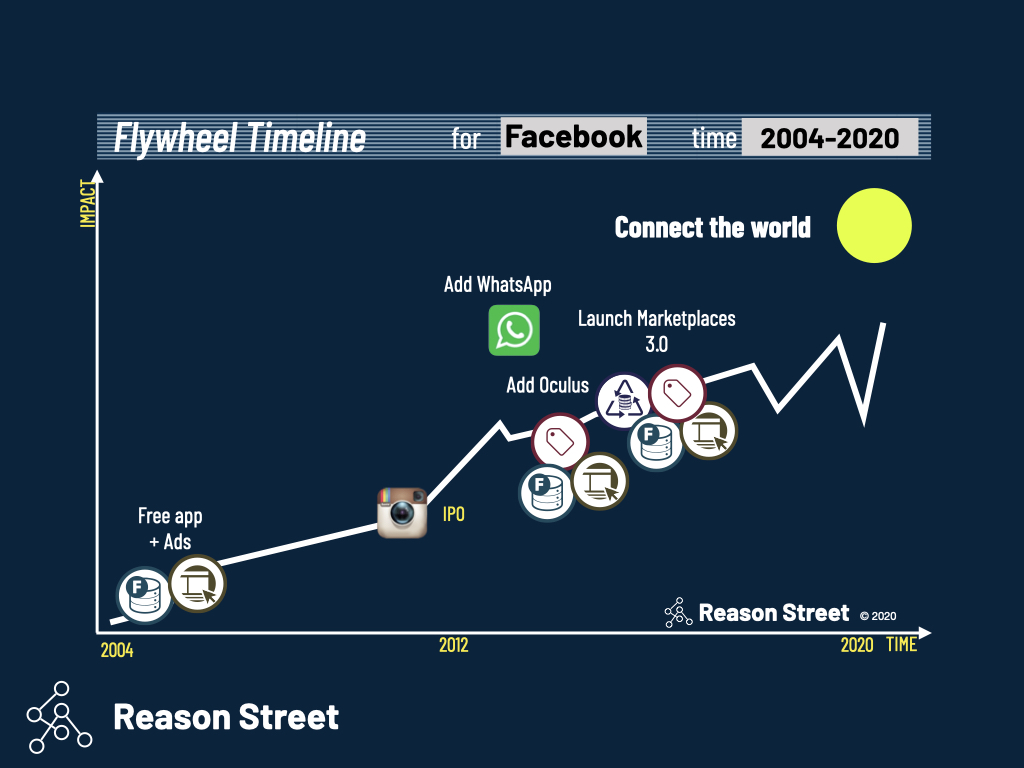 This teardown is our best guess following Facebook as a public company and listening to stories from employees. Let us know if you agree, disagree, or want to tell us a story about Facebook’s moves.

This content is provided for informational purposes only, and should not be relied upon as legal, business, investment, or tax advice. You should consult your own advisers as to those matters. References to any securities or digital assets are for illustrative purposes only, and do not constitute an investment recommendation or offer to provide investment advisory services.