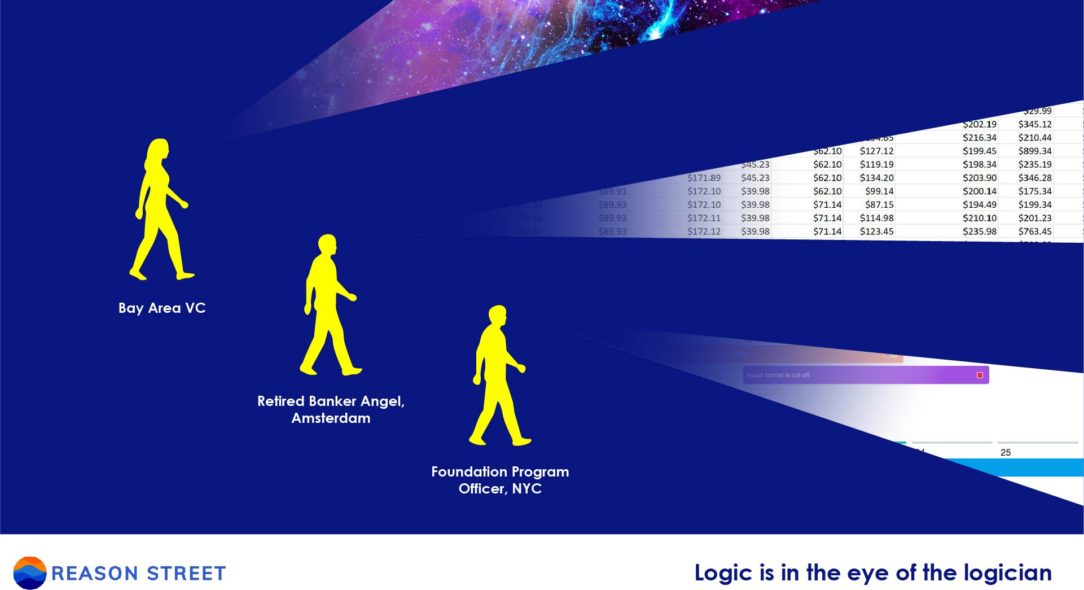 “How do I fund this?” This is the most common question I get when meeting with students, researchers, artists, corporate innovators, non-profit directors, and government policymakers when embarking on a new idea.

So I understand the question about funding, but it is often premature. You can’t answer this question until you know what the concept is, who the customer or key stakeholders might be, how the community you want to help might value what you want to create.

But I see this question about funding creep up at the earliest stages of concept formation.

In a global age shaped by capital expectations, our imagination for what we might want to create is often constrained by what we believe our future funders will demand.

Future funders of early-stage concepts have different expectations. Here are a few:

These funders put much of their emphasis on you, the founder.

They’ll encourage you to “swing for the fences” to achieve multibillion-dollar business outcomes. Profitability is not the aim of these funders in the short term, because all energy and cash must be spent on developing the technology that leads to an accelerated exponential growth curve and a competitive edge. Typically, these angels are spreading their bets and you are just one of 10 or 20 investments they might make this year, which is why they say that it’s ok if you fail.

Angels are mostly former tech founders. They are investing in you, the founder, and do not need to see detailed financial projections because they know from experience that it’s mostly science fiction at the start anyway. In fact, they want you to spend all of your money on that future growth because the future value is worth more than any profit you can generate today.

If you want to get this money, you have to shape your concept into a hyper-growth machine. You need to somehow show that you as the founder and your team have the kinetic potential (or a Computer Science degree from a top school) to propel your growth forward.

These funders want to see some numbers in a spreadsheet before they can make a decision about what to fund. To fit the mold for this more conservative angel, you need to have thoroughly developed your financial model. You may even need to already be generating revenue and profit before you merit consideration.

I often find founders in parts of the world who have only been exposed to this type of Angel community which is typically made up of the former successful executives of the local industry. For example, in the Nordics, many Angels were former oil and gas executives, and see the world through the logic of a big energy project, with aims to achieve profitability at some point in the future.

New York City was like this up until the last 5-7 years filled with former investment bankers using their banker logic. I still run into startups with these kinds of investors who put pressure on the company to get to breakeven, fast. This is challenging if the company’s ownership table includes the Silicon Valley-style angel, who wants all cash to be invested in a go-big-or-go-home outcome.

There is a round of investment called “Friends and Family” which precedes raising from professional angels. For example, Jeff Bezos, who at the time was leaving his Wall Street job with his then-wife MacKenzie, asked for $300,000 from his step-dad to move across the country to start Amazon.

The story told is that families and friends will believe in you, trust you, and be generous, therefore not taking too much ownership at the start. Also called the “Fool’s Round,” friends and family investors are more likely to lose their money because they are not spreading their bets like angel investors.

The challenge is that most founders do not have friends or family with $300,000 or even $1,000 to spare. To combat the woeful lack of diversity in later-stage angel and venture capital fundraising, some have suggested that we kill the concept of Friends and Family by naming it something else or institutionalizing this funding.

Prominent investors have fought back, mostly on Twitter, to call this fundraising round what it is – leaning on friends, and family, to get things going. “If you don’t have rich friends, well then show your entrepreneurial chops by making rich friends!”

Both are wrong. There is a major hurdle for people without access to networked capital because their social relationships have historically been excluded from capital. This is why we see such homogeneity when you see who owns what. Renaming it won’t make this problem go away. Instead, these founders tend to look for grants to get going.

These funders are addressing a stated government policy, and typically need to make decisions in peer-reviewed settings. These include small grants at the local community level through city-based Small Business agencies, or multi-million dollar grants distributed by Federal Agencies, such as the NIH, NHS, DARPA, or grant-giving programs in the EU, India, China, and other countries.

There is often a committee of people reviewing early applications, and another committee of people who discuss the merits of different grant proposals. You do well in these grant-giving systems if you are a known entity in their circles, likely because you are doing research or you are associated with a university that is respected by the people on the committee.

These funders work for wealthy individuals and their families, living and dead. Their job is called Program Officer, and they have to prove that they’re not just giving the money away. They need to justify their logic so they ask you to specifically define how you’ll create good in the world.

You’ll hear requests for a “Theory of Change.” Despite the name, These are not proven, evidence-based peer-reviewed theories. Instead, they are a set of threaded assumptions that describe how your intervention might lead to change in the short term, and then a change in the long term.

Your job is to persuasively tell a story of the future for how your product service will lead to a larger system transformation. While you’re at it the Foundation does not want you to become dependent on grants forever, so you need to figure out how to generate revenue for your services.

These funders also work for wealthy individual and their families, living and dead, but their clients are very alive: the families of the original billionaire or family company. They typically follow the logic patterns of the cash conservative angel to encourage young companies to focus on profitability. Like the Foundation Program Officer, a professional Family Office Financial Manager needs to justify every decision and ask for financial scenarios.

Unlike angels, family offices are likely to seek more control in the company in the form of ownership, so they may ask for a greater percentage of your company than an angel investor. Why? Because Family Offices are managing the wealth of someone who made money running a business, and they may want to add their expertise to help you run your business.

Make sure you seek this type of support and talk through future funding rounds if things go well. Family Office Managers may not be as comfortable with the Silicon Valley approach of giving up ownership as the pie grows larger.

More and more founders are seeking out debt as a capital type to fund their early-stage dreams; some out of necessity, others out of the opportunity.

Lenders to small businesses are often in a chicken/egg dilemma. They typically want to give loans to a business that is up and running with solid financials and a business plan, but early-stage companies need capital to start.

The benefit of this type of debt is that you, the founder, hold on to your ownership. If you can get your company started with early revenue without external investment, then debt may be a great option to scale. But for businesses that require upfront investment to get going before the revenues kick in, debt is not a starting option, outside of credit cards and second mortgages (not recommended!).

These are the most confusing early-stage investor type. You have to address their logic right away based on your expectations for your growth trajectory, timeline, how you want to consume resources, and what exit means to you.

If you are operating at a community scale and see that there is a risk to rapid and aggressive scaling, then deliberately seek out investors that provide patient capital, meaning they are comfortable with longer time horizons and are not just seeking billion-dollar outcomes.

If you want to share ownership with your community, then seek investors that are aligned to your values and work out the right company structure or long-range plan for an exit that keeps the wealth in the community.

Most early-stage impact investors are not patient investors. They are angel investors who believe that by focusing on the world’s greatest problems, there will be enormous markets created. Therefore, they may fit the profile of the Silicon Valley angel, looking for a big story.

Alternatively, they may fit the pattern of the cash conservative angel, making sure you don’t over-spend because they take you seriously and do not want your company to fail. They may also ask for your Theory of Change if they’ve been hanging out with those Foundation folks, so be prepared for all of the questions!

How to deal with all of these different logics? Remember that you have agency in the future story you are creating and you may want to focus on one type of funder over others. Check out our alternative capital library to further explore.