The company is focused particularly on Goal #2, to achieve Zero Hunger by 2030: to end hunger, achieve food security and improved nutrition and promote sustainable agriculture for all.

AeroFarms is leading the way to address our global food crisis by building, owning, and operating indoor vertical farms that grow safe, healthy, and flavorful food in a sustainable and socially responsible way.

Where on the Resiliency Scale?

AeroFarms has been able to serve the local markets with fresh greens during the pandemic and to fulfill local demand through supermarkets and other grocers. The company sells fairly high priced greens to higher end customers through Whole Foods, Fresh Direct and others, who have seen an increase in volume. AeroFarms is not only making tremendous strides to reduce water use by 95%, reduce time to harvest by 30%, and grow their leafy greens with zero pesticides, they are serving the local food supply in NYC. The main claim: the company says it can get to 130 times the amount of produce per acre verses standard farm-based agriculture.

Why not fully  flourishing? Our guess is that the current business model is not yet fully proven. It is deeply capital intensive to grow vertical farms. AeroFarms had previously relied on restaurants and customers like Singapore Airlines, for whom they could grow specifically  to their requirements, and of course those customers and potentially higher margins have disappeared.

Additionally, vertical farms like AeroFarms do rely on intense energy to power the data, lights, and systems to grow everything indoors. While the cost of energy has collapsed during the pandemic and does not challenge the cost model, in the long run companies like AeroFarms will need to publicly address commitments to lower Greenhouse Gas Emissions in their B-Corp statements. 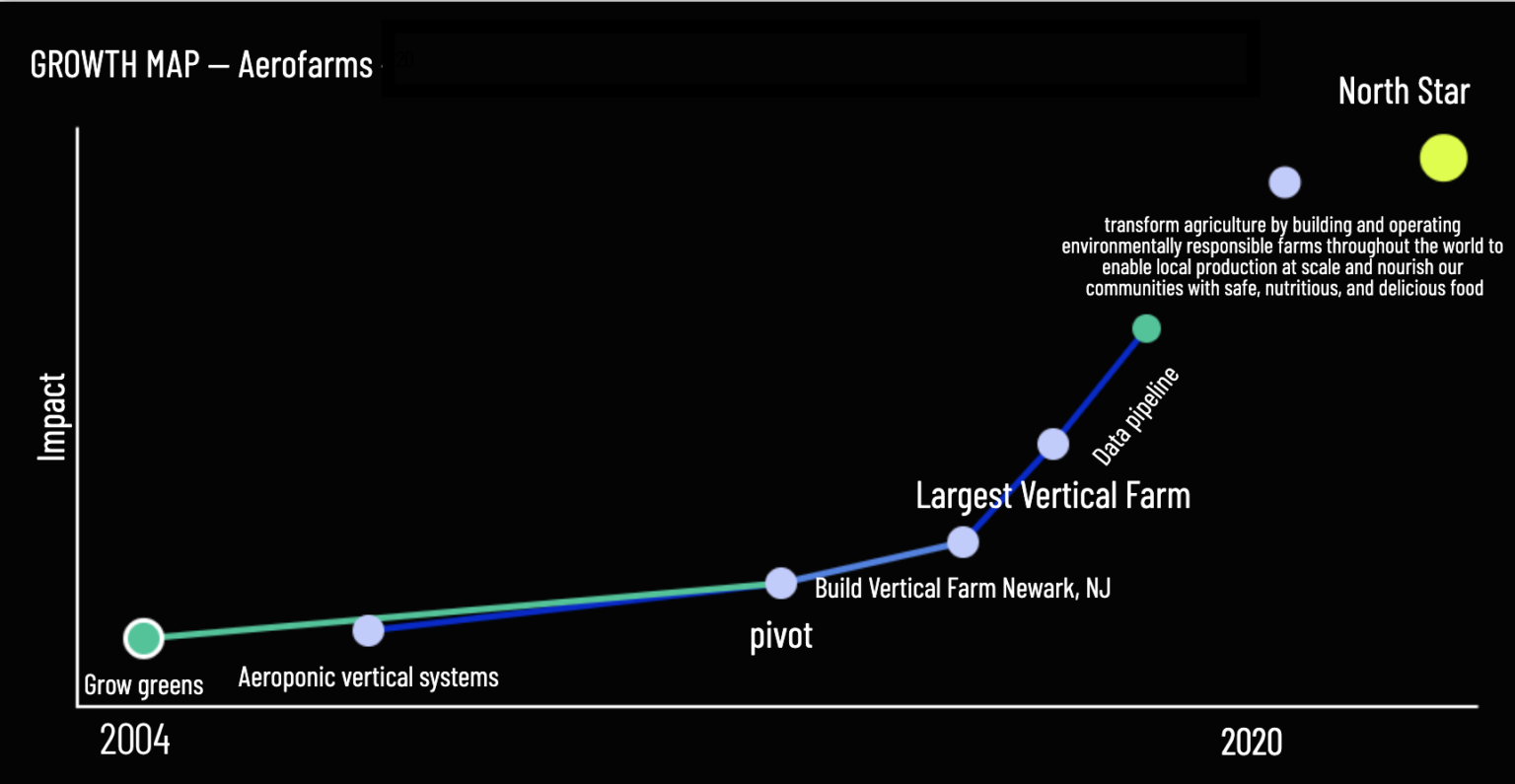 AeroFarms began in 2004 as an upstate NY experiment where founder Ed Harwood, a former associate director of Cornell Cooperative Extension, tested more than 130 varieties of greens including kale, arugula and komatsuna—a spicy member of the turnip family also known as Japanese Mustard Spinach—while developing the business.

AeroFarms would sell their greens based on aeroponic methods.

In 2009, shifted to sell their aeroponic method as a At first the comp vertical farming systems based on the development of their aeroponic or air-based method for growing greens.

AeroFarms executed a series of massive capital raises as the company moved to Newark, NJ and started to retrofit a former paintball center, and then build a 70,000 sq. foot former steel mill. The company’s investor pitch is one of those world-changing visions that appealed to David Chang, IKEA’s holding company, and Goldman Sachs alike. Their way of farming minimizes food safety risks; no soil intervention, completely insulated from neighboring operations, no usage of pesticides, and the package of greens can be tracked down to the exact square foot of growing.

The company invests heavily in the data intelligence, sensors, and light technology that enable the company to customize growing needs per customer, and to predict and deliver on demand. The challenge:  solve the giant optimization problem in agriculture to use just the amount of energy, water, and nutrients necessary to produce food, and no more.

AeroFarms masterfully wins appraisal from media and other sustainability sector influencers, receiving a TIME Magazine invention of the year award, invitations to Davos, Fast Company accolades, and other fanfare.

Move beyond leafy greens! The vision and mission of AeroFarms can only be realized if the company is able to prove other types of agriculture beyond leafy greens like kale. While investors may have been patient during this learning process, under the current economic climate the company may be pushed to get to unit economics breakeven, and we predict this will become a major milestone as well.

Long-form story with origins of AeroFarms in The New Yorker.