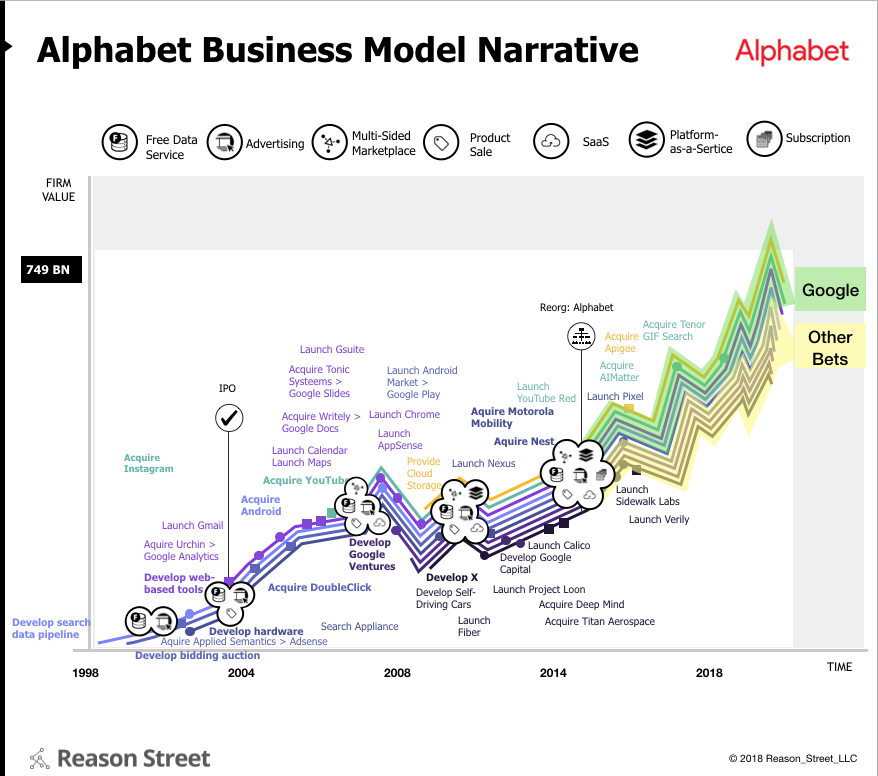 This is the third in our series on FANG company business model narratives. Read about Facebook and Netflix.

Typically, when companies get big, extremely mega big, $100 BN revenues big, they start to slow down.

Google is not slowing down.

Companies built on technology follow an S curve of growth. At the start of the curve, adoption is slow and development costs are high. At the inflection point of growth, a lead solution dominates and growth accelerates. Google is trying hard to find new business models for growth.

3 Years ago, the company reorganized with a holding company structure called Alphabet Financially, Alphabet reports on the progress of and split into two primary units:

Google, which includes the search engine and advertising business, Youtube, Android, and hardware like Pixel phones and Google Home. This division comprises 99% of revenue.

Other bets, which includes Sidewalk Labs, Waymo, Verily, and other moonshot breakthrough investments. Other bets delivers 1% of Google’s revenue

The benefit: Alphabet gets 99.5 per cent of its revenue from Google and is expected this year to turn in its highest growth rate since 2011, even though its revenue will be nearly four times greater than it was then.

Google prior to the reorg has appeared to be a company spreading itself thin and over-investing in far-reaching moonshots. But by separating out how Google invests and spends on the core money-making technology (search, Youtube) vs. the future (Waymo, Fiber, Verily) investors now see more discipline and focus.

The downside: Google is so big it’s become a target. Just last week 60 Minutes ran a story about its monopoly power and privacy policies. The stock was following the overall technology correct that started early this year, when Facebook was put under the spotlight by regulators. But the day after the 60 Minutes story, the stock didn’t budge.

It’s hard to prove a theory of monopolistic harm in such a competitive industry. Despite the massive growth, Google and Facebook’s overall share of digital advertising declines as Amazon starts to take more share.

Compare Google to Facebook, and you see a company that has had more success incubating new business models in hardware, cloud storage, apps, in-app purchases, and the app marketplace Google Play.

The real test for Alphabet: will the Google dominant logic dominate as the primary mental model for how the company behaves?

Dominant logic is the disease that killed Kodak, Blockbuster, and Nokia, and it threatens every successful large-scale company facing disruption—which is all of them, including Google. The danger isn’t so much the disruption itself, a product of fierce new competition and shifts in the technology landscape; it’s the faulty mindset that hampers senior management when it’s preparing for and responding to non-linear change.

“Dominant logic consists of the mental maps developed through experience in the core business and sometimes applied inappropriately in other businesses.”—C.K. Prahalad,

Prahalad, a management professor, was researching the failure of diversified conglomerates in 1986, not the Alphabet strategy of 2015.  He found that a top executive group’s ability to manage a diversified firm is limited by the dominant general-management logic it already knows.

We’ll only know when Other Bets and Google’s non-advertising business models start to contribute to real revenue growth along side of advertising.